UPDATE – December 2021:  The biography on Seth Overton is essentially completed!  I am searching for an appropriate editor and then I will need to see into getting this published.  I am told that in today’s market, biographies on old white guys garner no interest, and so it may be difficult finding someone to publish.  When I get a sense of momentum, I’ll announce it here. 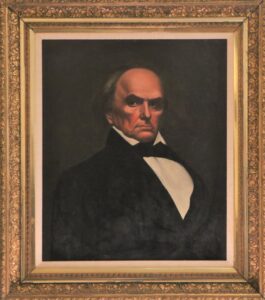 1830s portrait of Seth Overton, bought into the Portland Historical Society on 11 January 2022.

Prompted by the inquiry from Mr. Walter Glasspool, I would like to expand upon this file.  I do, in fact, have quite a lot of information and plan to put it together into a more cohesive book, but it will do to share a bit more of the overall story.

Seth Overton of Chatham, Connecticut… Specifically in the “downtown” portion of Chatham (known as East Middletown Parish and the First Society in Chatham) that was to separate in 1841 to become the current town of Portland.  Seth was the contractor for the building of the ship USS CONNECTICUT and was proud of this vessel that he based a couple more ships (smaller) on the design built for speed.

Seth was born on 8 March 1759 in Southold, Suffolk County, Long Island, NY, to Elton Overton and Sarah Reeves. It seems that by the time he was 16, he had developed skills around the sea and shipbuilding, both of which would serve him in his life to come; in 1775 he had traveled for work, winding up the Hudson River to assist in the labour of building a fort, but when that work stopped he took up nearby there in aiding to build ships for the American cause.  His family was among the mass of refugees to Connecticut from Long Island in August 1776, fleeing Long Island in the wake of the British victory in Brooklyn, and Seth traveled overland into Connecticut to rejoin with his parents and siblings. The Overtons were among the many families that settled up the Connecticut River, some of which wound up in Chatham, on the east bank across from Middletown. Here, on 15 Apr 1779, Seth married Mehitable White – (b. 21 June 1754 to Capt. Noadiah White and Lois White) – at the Chatham Congregational Church, and moved into his father-in-law’s home: what is currently the Ruth Callander House Museum of Portland History (Belonging to Capt. Nathaniel White, then son Noadiah White, then to Seth Overton through his wife, Mehitable). They had five children: Seth Jr, Prudence, Charlotte, Augustin, and Oliver.  Seth Jr. was to settle further east in what is now Marlborough, CT, and is buried in the little cemetery next to the public library. Seth Sr’s wife Mehitable died on 20 Aug 1828, age 74, and Seth remarried in 1831 to Sarah Ward, in NYC.  Sarah was from Pittsfield, Berkshire County, MA, and upon Seth’s death in 1852, she returned to Pittsfield and moved in with her younger sister Elizabeth, dying there in 1854.

By most accounts, Seth had been an extroverted character and was heavily involved in local business and shipping, keeping a wharf and store in Middletown along the CT River, crossing over from Chatham in the ferry, and serving as his own captain for various voyages.  There were several contemporaries of Seth’s that remarked that he “was found of creating disputes” and at times behaved as a bit of a scrapper.  It was suspected at one point that he was trading with the enemy – British shipping.  However, it turned out that he operated under a license to act as something of a privateer, bringing back goods either stolen from the enemy on Long Island or transporting over belongings of other refugees, gathering things surreptitiously.  Later he obtained a full letter of marque, as mentioned below.  In his own papers he relates that he had some hand in the building of the warship OLIVER CROMWELL while she lay in New London, that he was directly involved in the building of Fort Constitution in 1775 (Putnam County, NY), briefly served as a volunteer soldier to serve in Saratoga in 1777, aided in “short campaigns in defense of the coast“, and only one actual cruise in a privateer before being employed by Major John Davis for over a year in transporting cloth for making uniforms and clothing for American soldiers, and in this capacity was captured and imprisoned in New York in one of the “sugar houses” (“and beaten with extreme vigor“) until he was exchanged and released.   I hope to put together a more comprehensive biography for this exceptional man which I hope might bring him more into the light of the local history.  Despite a well-meaning veteran’s marker planted at his grave, Seth was not ever in the US Navy much less a captain in it… Rather, he was a sanctioned privateer (the row galley REGULATOR, seemingly another privateer sloop GOVERNOR CLINTON, and the whaleboat HUMBIRD. After the war, he became a merchant shipmaster, was involved directly in shipbuilding and trade, had his own store in Chatham and a wharf and store across the river in Middletown, CT.

It is interesting to note that Seth has a reputation among some of his descendants for being “a pirate”, or a highly successful privateer.  However, in Seth’s own letters and later admission in his pension application, he only was commissioned for a single cruise as a privateer ship’s master.  This was in July of 1781 in the row galley REGULATOR, 4 guns and 16 men.  On 26 September of that year, Seth captured the British vessel RESTORATION which was condemned in a court in Hartford.  There is another record that Seth does not seem to recall in his application papers in which Seth commanded the privateer sloop GOVERNOR CLINTON and on 19 December 1782 he captured the enemy privateer sloop DOLPHIN bound for the British Garrison with fuel (wood for burning) and provisions.

Seth had a short-lived mercantile partnership in Middletown with an Isaac Riley of Chatham (1795-1796), then thereafter on his own, and later served as an officer in the Connecticut State Militia, retiring as a brigadier general, of which he was immensely proud.  During his later days, he apparently would walk about town in his General’s coat and prefer to be referred to as “General”.  I would look at a “Riot on Main St.” by Doris Sherrow for a window into Seth’s life.  He was, before becoming involved with the State militia, a merchant shipmaster and in keeping with the customs of the day was called “captain” as a courtesy; this was not because of his service as a privateer.  But add to this that in October 1796, he was commissioned a Captain in the 2d Infantry, 23d Regiment of the CT State Militia, so this also is a consideration, a Major in May 1799, and Lt-Colonel Comdt. in May 1802.  Brigadier-General in May 1807. Retired 25 May 1809. Seth had served four years as a selectman for the town of Chatham, represented the town in the CT state Assembly for two sessions, became a county judge, and served as the county treasurer.  His remains are in the old Portland Burying Ground.

I have had the honour of sharing information with and conferring with Doris Sherrow-Heidenis and with Gail Kramer “Overton” Mason – the latter a direct descendant of Seth through his eldest son, Seth Jr; also with several other descendants of Seth Sr.  I have collected quite a few of Seth’s letters, his letter book, and pretty much all his correspondence to and from the Federal Pensions Office, but what I really lack is his image; Gail told me that when she was perhaps 12 or 13, her mother brought her along to visit a cousin who at that time lived in the “Seth Overton House” in Portland.  Over the fireplace was a painting of a man that she was told was her ancestor, Seth Overton… Sea Captain, Militia General, and RevWar veteran.  After they left for home, Gail never saw the portrait again.  Gail passed away on 28 Oct 2011.

Update: 12 Jan 2022.  Jointly, the Portland Historical Society and I purchased the portrait of Seth Overton and two more, presumably of his son Augustin and grandson Evelyn.  These had been thought lost but in fact had always been next door, in the old house called the Augustin Overton House, and NOT moved away west as was believed. The three portraits were placed in the Portland Historical Society on 31 July 2022 where they will now live permanently.

Please keep in mind that this is a work in progress…  Expect corrections and updates.  DO reach out to me with questions or anything you might have to add! 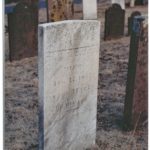 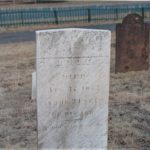 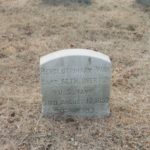 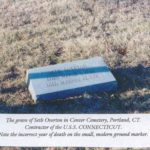 As of 25 July 2020, this marker is no longer one site. I have no idea of when it might have been removed, but given the bad date, it’s for the best. 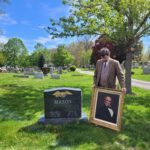 The author bringing Seth to the grave of his 5x great granddaughter Gail for a reunion before the portrait is installed in its forever home. – 8 May 2022 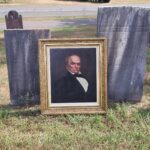 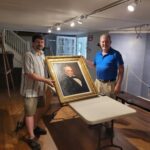 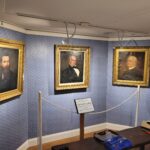 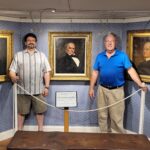 3 thoughts on “General Seth Overton – Contractor for the USS CONNECTICUT”