Louis (Jr.) was born in New London, CT on 30 Oct. 1780 to Louis Manierre (formerly of Marne, France and a RevWar veteran) and Rebecca Miner (Minor) (of Lyme, CT).  He took to the sea and in 1799 he signed into the new US Navy as an ordinary seaman aboard the USS Connecticut, under Capt. Moses Tryon.  He remained with the vessel when the command changed in Nov. 1801 to Capt. Richard Derby, and was transferred to the USS Essex in NYC harbor when the Connecticut was decommissioned and sold into the merchant service.  Like many ships, many of the officers were bullies and cruel, and Louis was among many who deserted while the Essex was still in harbor – truly not so uncommon for the period.  He returned to New London, no record of his being taken up and punished having come to light.  He continued his work at sea and it seems he married twice, having several children including a son named Louis or Lewis who kept a fruit stand among other things in the city.

Many of the vital records for New London, CT are missing and so much of the data I have gathered on him and his family are from alternate sources and such items as family records and headstones.  I am working on an informal biography on Louis Jr, and I have posted some of his history on Ancestry.com.  He is buried with both of his wives in Cedar Grove Cemetery, New London. 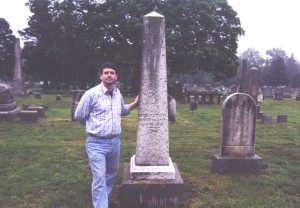 The author at the graveside of Louis Manierre Jr.