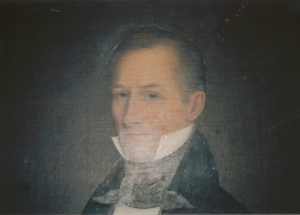 Silas Butler – painted a year or two before his death.

Silas was born on 14 Sept. 1778 in Wethersfield, CT, to Joseph and Abigail (Boardman) Butler; 5th child of 7. It is not clear what year but the family removed to Pittsfield, Mass, according to Stiles’ two-volume History of Wethersfield, CT. It is suspected that the move happened in 1796.

It is not clear if Silas remained behind in Wethersfield or came back to Wethersfield to study trade with an uncle, but he grew up learning the business. When the new United States Navy was created in 1794, it promised some new possibilities and adventures, but it took problems with the Revolutionary Government in France to launch the new navy into actual use in 1797. Silas applied for a position in the new US Navy – he was appointed purser or “paymaster” to the USS CONNECTICUT on July 3, 1799, handling not only the monies of the vessel but in charge of the monthly pay to the officers and crew, oversees the ship’s provisions, handles and distributes the “slops“.  He served aboard four vessels – The US sloop of war CONNECTICUT, the US schooner ENTERPRISE, the US frigate CHESAPEAKE, and the US frigate CONSTELLATION – until he retired from the Navy in November of 1805, going into private business, first in Washington D.C. but then removing to Manhattan to marry Phebe Waldron and then setting up business in Brooklyn, NY.  They had eight children, one of whom is thought to have been an adopted niece.

In 1817 he decided to return to the Navy, regaining appointment as a purser and became the purser to the new Brooklyn Navy Yard, NY.  He remained in that position until his death on 9 April 1837.

His descendants have kept artifacts from Silas, handed down through the generations, and by these, I have learned a great deal about the man.  I look forward to when I can focus on him and get his biography completed.