This is a brief explanation of the circumstances surround the why of the Connecticut being built and of the times during her merchant service.  This is a work in progress and is necessarily a oversimplified overview; I intend to amend it and clarify as time presents.

After the Revolutionary War the new United States was trying to find itself in the new geo-political arena.  Wedged between its former parent country England and the RevWar ally France, many compromises were made to protect American merchant interests while trying to keep a policy of neutrality regarding the continuing issues of traditional tensions between England and France.  Adding to the complications was that France was undergoing its own revolution and internally lacked stability, with the “government-of-the-week” expecting the US to return the RevWar favour by supporting the cause against England – although by this point the US lacked the financial capability to participate in a conflict of such scale, and at the close of the RevWar the US had disbanded all its standing military except a small army contingent pretty much holding down West Point.  All other defense measures were based solely on the plan of States’ militias.

The American merchant vessels often being picked off by foreign powers and the US no longer permitted to trade in British owned ports, President Washington sent New York Governor John Jay to England to forge a trade treaty, allowing US ships to trade in British owned ports and sometimes providing protection in convoys when traveling through dangerous waters.  France could not promise the same for its organized Navy was now dis-organized what with all the political upheaval in their country; however, France saw this treaty as a betrayal and began to seek reprisals against the US with French privateers, picking off American vessels, seizing goods “destined for England” (whether or not was besides the case), impressing men to serve aboard French vessels (ironic as England would do the same, leading up to the War of 1812), and all but actually declaring war against the US out of spite.

By then, John Adams became president and he sent three envoys to create a new treaty with France along the lines of “Jay’s Treaty” but the envoys were badly treated and shaken down for money, with demands that the US pay some bribes to even meet with the top authorities, and then a degree of tribute was also insinuated.  This became what is referred to as the “X, Y, Z Affair” and Pres. Adams along with Congress establishing the US Navy to deal with the situation, soon to become called the Quasi-War versus France (we never actually declared war, so it was in fact a “police action”).

John Adams is also known for his “Alien and Sedition Acts” which is worth your time to get to know.

Aside from the well-known big frigates (USS Constitution, and the USS Constellation being examples), new vessels were ordered to be built within the various states with waterfront.  In the State of Connecticut, a sloop of war (a small frigate with less than 28 guns) was built on the Connecticut River and then named the USS Connecticut, launched in June of 1799.  She was commanded by Capt. Moses Tryon of Wethersfield, CT, and the vessel served well and honourably for a year before putting in for repairs.  By the time these were done and a new crew recruited, the “war” was over (March 1801) and Congress downsized the Navy; roughly 1/3 of the vessels were sold off, 1/3 put “in ordinary” and 1/3 remained in service.  The Connecticut did not have the political backing to have her kept and she was sold off in New York in May of 1801 to a merchant and transferred into private service.

Despite the Tripolitan War, which began simultaneous to the downsizing of the Navy, the Govenrment did not reclaim any of the vessels sold off but relied upon the Navy as it now stood and added a few newly built vessels.  The Connecticut went through various hands as a merchant vessel, claiming NY first as her home port, then Philadelphia, then Charleston, and finally Baltimore.

Here’s a downloadable paper on the topic by Donald R. Hickey

A little cheesy (consider the era these were made) and a bit simplified as most historical films were, but still a very good introduction to this conflict and the infant US Navy. 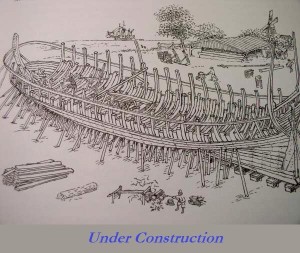 I like this guy and his videos but I also wish to point out that he downplays the seriousness of the Quasi-War as compared to how it was viewed at the time of the conflict.  A few slips of the tongue leave the viewer with an impression of an already standing Navy and Marine Corps but he corrects himself later when speaking of the results of the XYZ Affair.  Worth the view.

2 thoughts on “The Quasi-War versus France”