Rick Gildersleeve is a descendant of Philip Gildersleeve – the man who was the subcontractor/foreman for the building of the USS Connecticut.  On the evening of 16 June, Rick will be giving a presentation for the Portland, CT Historical Society regarding the family shipyard.  This will touch on some fascinating local history and I think should not be missed.  Rick may even touch upon the Connecticut.

<<The Gildersleeve Shipyard
Friends of Portland Library and the Portland Historical Society present “The Gildersleeve Shipyard” by Rick Gildersleeve, Tuesday, June 16th at 7 p.m., in the Mary Flood Room, Portland Library, 20 Freestone Avenue, Portland CT. The presentation will cover the entire life of the Gildersleeve Shipyard including an extensively illustrated discussion of the development of shipbuilding on the Connecticut River through the “Golden Era” of the 18th and 19t…h centuries; related Gildersleeve businesses such as the store and lumber acquisition and the history of the ship The USS Cayuga by RG Skerrett (c 1900) shown below which was built in the Gildersleeve Shipyard and played a critical role in the Civil War. Come join us for this fascinating look at a pillar industry in the development of Portland, CT and the Connecticut River. Door prizes, from Gotta’s Farm will be given away at the end of the program. This is a free event. Registration is suggested but not required. To register, go to portlandlibraryct.org and click on the library calendar or call 860-342-6770.>> 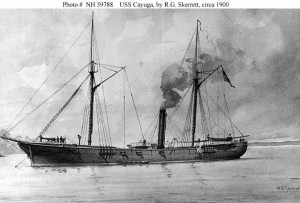 The USS Cayuga by RG Skerrett (c 1900) shown below which was built in the Gildersleeve Shipyard and played a critical role in the Civil War.